“Rick Monahan has dedicated his life to vintage BMW motorcycles. He didn’t watch Easy Rider, he lived it. Rick’s passion for these bikes sustained him from bad ass teen shooting down Route 66 to opening his own indie garage in order to “pollinate Western L.A. with as many BMW’s as possible.” A: Rick Monahan was the inspiration behind making this film. Vintage bike owners know that finding a good mechanic is like finding gold. Anyone who’s met Rick will tell you what an honest and great guy he is. I wanted to do something special to honor him.

Rick gave up his day job at 50 because of his obsession with old Beamers. He’s really more of an artist with these vintage bikes; he lives in his shop with a hundred or so on hand to keep him going. As he says, he’s busy “pollinating the streets of LA as many vintage BMW’s as he can”.

A: I was looking for an interesting festival online and I came across the MFF.  I could tell from the MFF website that it was a festival fueled by a passion for the motorcycle culture. I was also excited to be a part of something new and respected the crew that was making this up and just going for it. Q: Have you made any other films, and if so, is there a common theme throughout your films?

A: In 2011 I made a film called URBAN ROOTS. It’s a documentary about the urban farmers in Detroit. Like Urban Roots, Black Kat was made out of my connection to the people and the subject. Because films are so hard to make, I’m only going to do something that I believe in. So far the common theme throughout my films are people in unique situations doing what they love at any cost.

Q: Do you ride a motorcycle, and If so, tell us a little about what you ride, and why?

The reason I ride has evolved over the years. About 10 years ago I bought the BSA because I was broke, so I started riding because of my financial situation. Once I got into it the feeling and memories of riding dirt bikes on the trails with my brother would come back constantly. And the smell of gasoline would remind me of my dad. It was a means of transportation but also a mental time warp that brought back some amazing memories.

Now the bikes are pure joy. They give me my Zen when I’m riding and when I’m wrenching on them. Motorcycles also open me up to meeting amazing friends and having experiences that I would never have had otherwise.

A: The MFF reminds me of the Sex Pistols…  they’re just doing whatever they want and that really resonates with me. They’re doing it the right way and with the right people. A: My favorite motorcycle movie is Motorcycle Diaries by Walter Salles. I saw this film just as I was getting back into riding. Anyone who has spent some serious time on a bike can appreciate that desire to take off in search of something.  It has everything, an amazing Norton, adventure, great cinema photography, beautiful soundtrack and social justice tied to the film, a great combination.

A: I just produced a multimedia iBook based on Rick that’s available on iTunes. The iBook features my film Black Kat, old photos and advice from Rick. See the book HERE 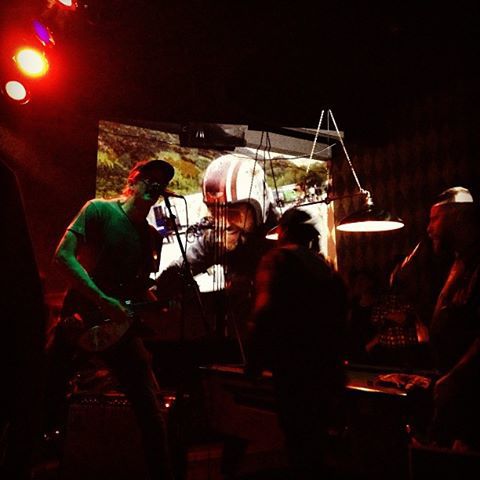 It is with our great pleasure that we unveil the custom, hand made trophies that will be awarded to 5 deserving filmmakers this Saturday, September 28th at the 1st annual MFF Award Ceremony!!
These trophies were made possible by a collaboration of wonderful, talented folks. Have a look… For the Winning Short Film, Feature Documentary, and Feature Narrative awards, the trophies started as Thinline Seats – Pans & Foam and Macho Negro Seat Hinges from the awesome guys over at Biltwell Inc. These went over to MFF Co-Founder, Corinna Mantlo (Via Meccanica Custom Upholstery) for some fancy custom leather covers, applique and stitching. The image depicted is of course, the MFF logo designed by tattoo artist Rick Schenk. Then we called our friends over at 2nd Stroke Mopeds, to make up the Best Of Fest, and People’s Choice trophies. Ain’t those wee little pistons cute?! When finished, those went right over the the amazing, multi talented Dan Bones for hand engraving.  Wow! People’s Choice winner will be based on ballots at every screening so See some flicks and cast some votes! And, buy your VIP Full Access Passes today to gain access to the Award Ceremony, meet the Filmmakers, Hosts, and Judges and check out the 2013 trophies in person.

See you at the flicks,