After a whirlwind of a week and a day to breathe, we’re finally down to the 3rd day recap. Saturday was by far our “most ambitious” day of the festival with 3 screenings, awards, and a party at 2 venues over the course of 13 hours.

The day started with a breakfast screening of “I Ride a Triumph” and “The Salt Ghost: Return of the Nitro Express” at Over the Eight. Our weary, possibly slightly hungover attendees trickled in one by one to eventually pack the room and partake in some nutritious concoctions. We were super lucky to have filmmaker Kadshah Nagibe from “I Ride A Triumph” in attendance to answer a few questions about his film and making bike movies in general.

After the screening our host Paul, knowing no limits to his boundless energy, absolutely gushed over our pal Greaser Mike‘s incredible Triumph.  I’d try to list all the insanity Mike’s packed into this bike but it’d take me 3 whole posts.  Let’s just sum it up as the world’s sickest pre-unit, 5 speed, 750 Triumph.  Just go to Greaser Mike’s Triumph, 5speed, 750, pre-unit build thread on ChopCult for the details

Of course, at a motorcycle film festival there’s always gotta be one bike needing a bit of help to get on its way to the next screening… a few minutes later she was up and running again with some help from a few friends

Then we threw filmmaker Eric Tretbar in the Ural and headed over to Saint Vitus for the 2 final screeenings, including his feature narrative, ‘Girl Meets Bike‘.

Eric was joined by “Loaded Gun Customs: Bucephalus Build” filmmaker Kyle Pahlow for the screening and the post-show Q&A was fascinating.  Hearing both filmmakers rap about their very different experiences and reasons for making their films really added some perspective on just how varied and passionate the motorcycle filmmaking community is.

(photo by JP, The Selvedge Yard)

After the packed final screening of “The Build” and “White Knuckle: The Story Of The Motorcycle Cannonball“, we had another great Q&A with White Knuckle filmmaker Brian Darwas and then it was on to the awards.

We had the pleasure of handing out amazing trophies for our film categories provided by Biltwell and upholstered by our very own Corinna and Via Meccanica, the people’s choice and best in festival trophies made by 2nd Stroke Mopeds, and an extra special prize provided by Revzilla to some very deserving filmmakers.  Stay tuned for a post announcing all the winners!

Then it was on to the party with MFF Award winning filmmaker Brian Darwas, and Scrapers.

And the ‘best damn punk rock band in Brooklyn,” Foster Care rocking a double drum assault for the first time ever.  With our friend Harry of Almost Ready Records spinning solid jams for the rest of the night, the 1st MFF closed out in style. 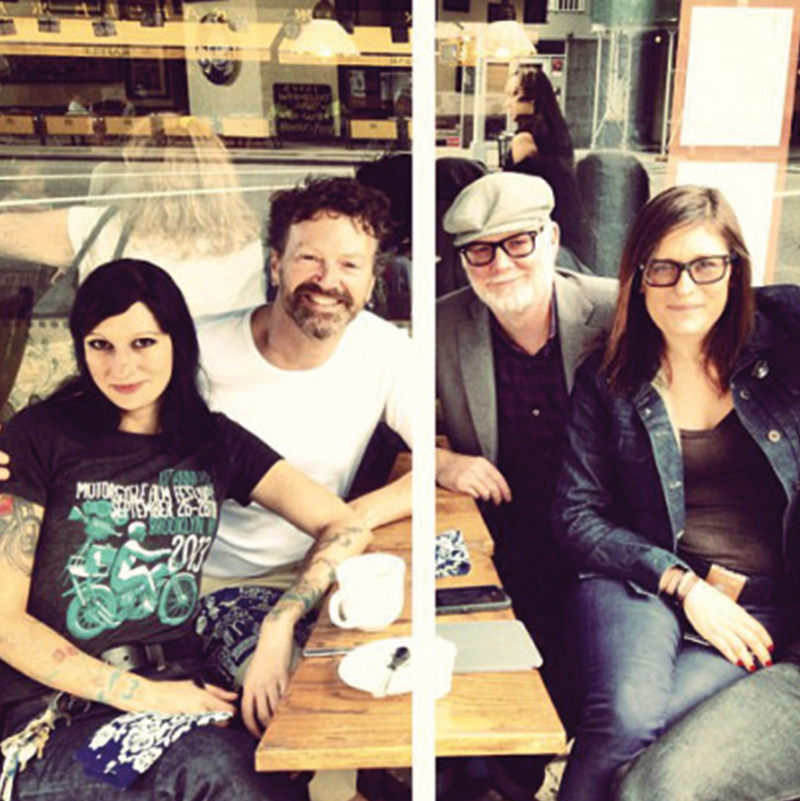 How can a Friday morning start off badly, when you get to hop on the BSA and the Ural Side Car rig and throw on custom Biltwell helmets, hand painted by the team over at Indian Larry Motorcycles? 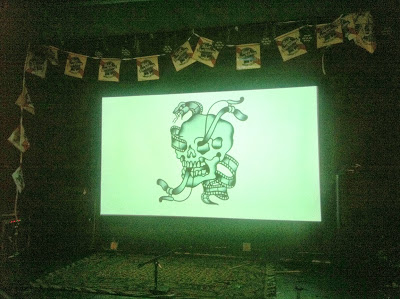 Friday morning, before the screening, we were able to make a little time with the 2013 Judges to gab, and do a little 2014 planning. We cannot wait to unveil the coming year’s updates. Sign up for blog posts by email to keep yourself in the know. Theres a sign up button over on the right –>

The 6:30pm screening of the short film Black Kat, followed by the narrative feature The Best Bar In America played to a packed house at Saint Vitus, and the response to the films was wonderful.

Everyone was crazy about this year’s merch. If you didn’t get a chance to pick up an MFF skull logo, shirt, or a Adam Nickel designed shirt and poster, check out the online store. We’ve gotcha covered.

The after party was a blast with DJ Sommer Santoro of Black Gold spinning vinyl, and bands, Wailin Storms, Liquor Store and Tombstone Brawlers killed it. So good!

then it was off to bed, to get up and do it all again Saturday. Thanks to everyone who came out!