Meet the Artist Behind the 2016 Poster: Rachel Wolfson Smith 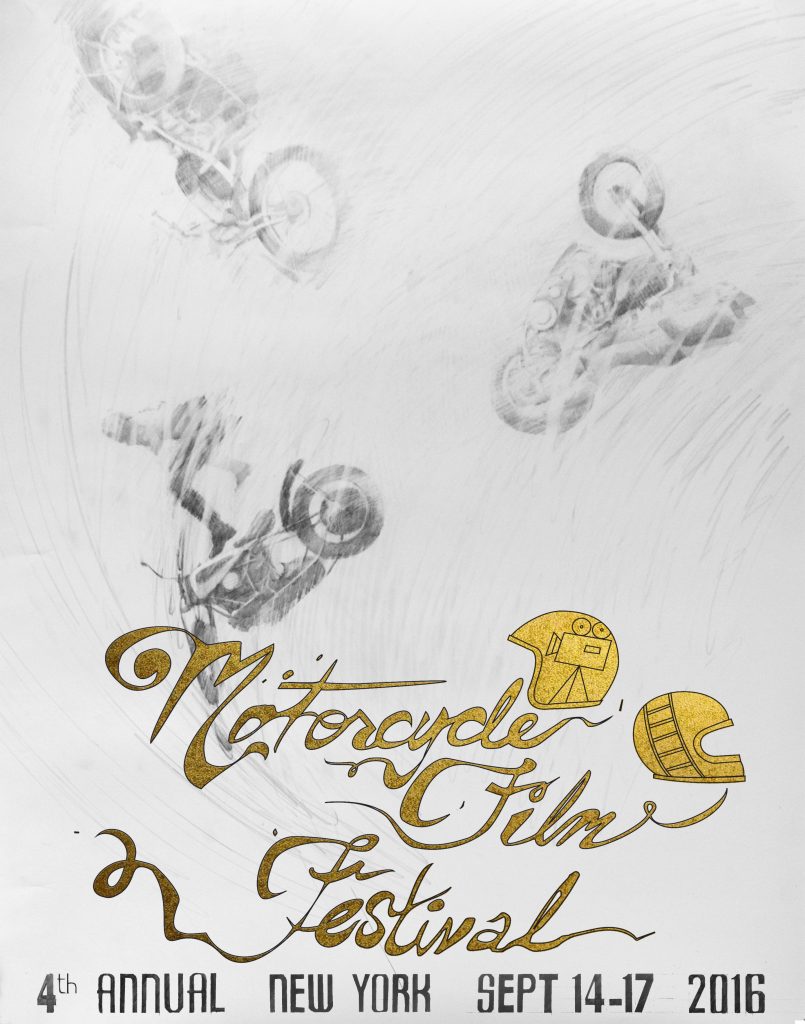 Tell us a bit about the inspiration behind this year’s Motorcycle Film Festival poster. Where did you begin and where did this piece take you?

Paul d’Orleans and I met at the Handbuilt Motorcycle Show in Austin. He saw my drawing in the Oil & Ink traveling print show there, and he and Corinna Mantlo contacted me because they wanted something a little different for this year’s poster.

One of the trademarks in my artwork is how I blend different imagery and themes together. For the poster I wanted to counterbalance the serious imagery of the crashing vintage bikes with a fabulously swirly font. I do a lot of gold-leafing in my smaller drawings and incorporating it into the poster was a fun way to keep things from getting too serious. The gold is inspired by Renaissance icon paintings, but I love that it has a bit of a 70’s vibe going on.

Any hidden meanings or tip of the hat mentions that we might have missed in the poster?

Of course! I’m working on reinterpreting and modernizing old myths in my drawings and was thinking about the story of Icarus getting too close to the sun when I drew the bikes falling from the sky.

The texts at the bottom were inspired by some set typed lettering I saw during a studio tour here in Austin. I wanted to use a font that was classic with an edge; something that felt masculine and feminine at the same time. I landed on the beautiful Jefferson Gothic font which is bold but has these odd little details, and I drew it out by hand so it would blend with the drawn bikes in the poster.

What are your earliest memories of motorcycles? How does your love of this pastime inform your drawings and paintings?

I actually didn’t have a motorcycle until I was in my 20’s, but I grew up on a horse farm and practiced stunts and did a lot of trail riding on my horse as a kid. From the time I got my license, driving was my passion but since I couldn’t afford my dream car I worked overtime and bought a bike instead. Riding the bike felt really natural because when I’m balancing and standing on the pegs on the trails it feels like riding a horse.

In college I studied landscape painting and unsurprisingly gravitated to scenes with cars in them. As time went on I realized the landscape wasn’t as interesting to me as the vehicles were so I sharpened my focus. Cars are blocky though, and using them made it difficult to compose the paintings the way I wanted.

Since I’d always been really impressed by big Renaissance battle paintings I wondered if I could recreate their grand, epic qualities in my artwork. I started playing around, making weird drawings of dirt bikes flying through the air to mimic the angel babies that activated the top portion of those paintings. Before long I was subbing in motorcycles for horses too. I absolutely fell in love with it, especially since the flying bikes are logical but they also crack me up.

Painting, for now, has fallen to the wayside. Using pencil lets me mash together a bunch of different colorful content and make it look subdued and somewhat regal. Plus, I can make drawings that are absolutely huge and move things in the drawings around without waiting for anything to dry.

What’s a day in the studio or off the track like? Please share your process with us.

I’m a slow riser. In the morning I make coffee, reply to emails, plan my drawings, work out, and make lunch. Then when I get to the studio I dive in. I’m working on a lot of different projects right now, which is great because I like to bounce around. I’ll work on a gigantic drawing for a while, and when I get stuck or bored with it I’ll switch gears and work on a tiny intricate gold-leaf drawing or a commission. It’s my balance through extremes. I usually work right up until bedtime.

In addition to the Renaissance, what periods of art history inform your work?

I looked at a lot of artists when I was an undergrad like Antonio Lopez Garcia, Balthus, Paolo Uccello, Edwin Dickenson, and Mark Bradford, but now I’m more inspired by nonart stuff. Cinema and mythology, especially Native American, are big players for me. A lot of my drawings are meant to feel like film stills; freeze-framing action, or giving the viewer the eerie feeling that something just happened or is about to. I also read a lot of mythologist Joseph Campbell’s books, most recently The Hero with 1000 Faces. It basically lays out the formula for hero myths, which is finding its way into my drawings.

There are certainly a lot of great lesser known films, but the original Mad Max has been my favorite for a long time because of the way George Miller combined fear, adrenalin, pageantry and an insane amount of creativity into such a tiny budget. Miller is from Australia where “the dreaming” is an important cultural mythology, and it’s rampant in his films. While I was researching hero myths I watched Mad Max several times to see how he adapted the structure, and it’s amazing how much it conforms to the hero myth framework.

Most memorable bike you’ve ever seen?

Call it love at first sight, but the first bike that first caused me to rubber neck was a BMW F600 Dakar edition with the blue, white, and red flag painted on the gas tank. I don’t have one (yet) but when I bought my bike I was inspired by the Dakar and got a dualsport. Two years ago I had a layover in Dakar and felt like in a small way I’d scratched something off of the bucket list.

The Handbuilt Motorcycle Show in Austin is my favorite, but I’m so excited to head up to NY for the Motorcycle Film Festival this September! I’m thinking it might be a tie.

What inspires you? What keeps you creating?

When I started drawing motorcycles I never dreamt that it would lead me into a network of so many great people, and that there would so much to learn about different motorcycle subcultures. Always learning new things, staying just outside of my comfort zone, and being able to use art to connect with others keeps me creating and makes being an artist the best job ever.

Favorite quote about motorcycles or riding?

When I was getting my M license one of the first things the instructor said was “When you think you have nothing more to learn, get off of your bike and walk away”. I’m drawn to things that can’t be completely mastered. With riding there’s always a touch of fear and respect involved because of all of the unknown variables. I like that there’s an intense focus about riding that I often gets lost in other parts of our lives.

Words you live by?

“Practice and all is coming”
-Sri K. Pattabhi Jois

It’s a yogi quote that implies that the end result isn’t the goal. If you’re able to be present in the moment you’re already there.

I have a big solo show coming up in Austin that opens July 22 where I’ll unveil my largest pencil drawing to date at 10’ x 21’, and several new 8’ drawings. It’ll be a crazy show, and it’s hosted at a great gallery here called Gray Duck. I also have a bunch of interesting side projects and commissions keeping me busy that I’ll be sharing on Instagram over the next few weeks.

The best way to keep up with me is through Instagram via: @wolfsonsmith

Any MFF exclusive you’d like to share with us? Something that people don’t know about you, your work, or your process?

It may sound silly, but I love listening to rap music when I draw and my dream is for one of my giant drawings to hang in Ludacris’ house.