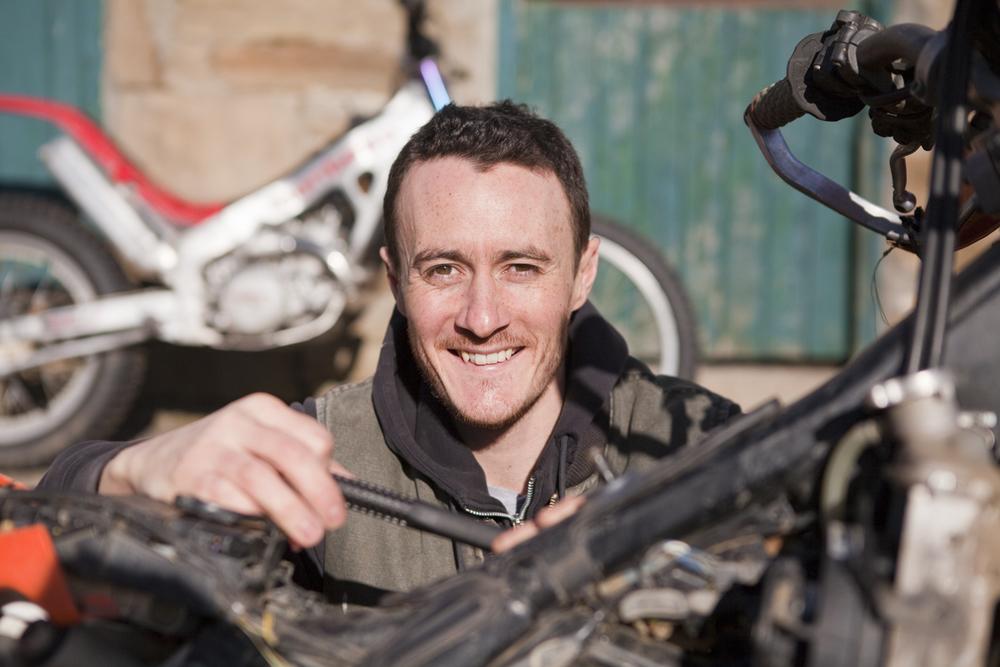 Last year “The Green Lane Relay” showed in the MFF, and this year you have “The Coast to Coast Relay”. Both of these document some pretty grueling off road rides. Can you tell us what attracts you to this type of motorcycling?
Motorbikes mean different things to different people. For some it’s about the speed, for others the individuality of customisation. For me I like the physical challenge and adventure. Riding Green Roads (which technically speaking in the UK are not actually ‘off road’ they are unsurfaced roads), gets you out to some of the most inspiring and remote locations in the country across terrain that you wouldn’t really believe a vehicle has the ability to cross. You get hot, sweaty, fall off, stuck in mud, drowned in rivers – huge adventures that you would imagine you need to go to the most remote parts of the world to enjoy, but it’s right here on your doorstep! I get to have a ‘micro adventure’ every time I take the bike out. And of course there is the sense of community and camaraderie that comes with it. There’s not many other pursuits where your mates will happily jump off their bikes and wade waist high into a river to help you out!

Can you tell us about your filming technique? You’re really right in middle of the action, how do you capture all this with all the unknowns?
Well, there’s two aspects really. There’s the technical stuff and then the storytelling aspect. A good film really needs a story, so that’s where I mostly start – what’s the story? In this case it’s a simple cross country ride on inappropriate vehicles. A great starting point.
I’ll have a rough outline of what I want to capture before I leave, sort of a mental storyboard, some key shots that will link everything together. For example, shots that show the bikes travelling from left to right across the screen so you get the idea of moving from point A to point B, a recurring theme that also shows the landscape changing.
For this trip I used a GoPro and a DLSR. I was going to take more fuel with me but that got ditched in favour of the big DSLR, we were travelling light! I’m a big fan of making stuff rather than buying it so I built custom GoPro mounts, the most effective of which was a simple one that allowed me to hold the camera in my mouth. A really quick and easy way of getting that POV shot that meant I could literally just grab it and shove it in at short notice. I also just used elastic bands to attach the camera to the chest strap on my rucksack.
As far as the unknowns go, well sure stuff happens that you don’t get to film. But I would rather be tight on the filming and have a manageable amount of material to edit than simply hit record and film everything – 3 days for footage, what a nightmare! And of course, with this kind of trip, there was a lot of action so you are guaranteed to get some of it on camera.

What do you find to be the more difficult aspects of filmmaking?
The biggest challenge is actually just enjoying the ride. When you are making a film as you go, you’re mind is always on, like you are stitching your mental storyboard together as you go. ‘What would that shot look like?’ ‘Have I got something to link this bit with that bit?’ ‘Was I wearing my rucksack in that shot?’
So there’s a certain irony that for this kind of film, the most enjoyable ride would be the one that you leave the camera at home for! But that doesn’t make good TV does it… 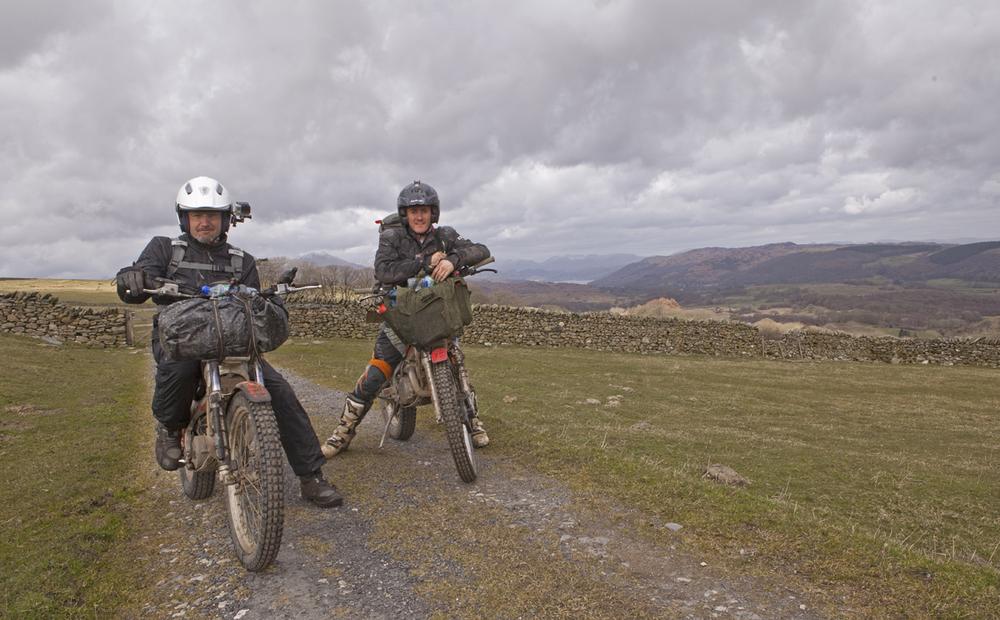 What about relay riding? In your film last year you mentioned that the UK is losing its green lanes. Has there been any development in the difficulty of finding places to ride?
The trail riding community in the UK is constantly in ‘battle’ with authorities who are trying to reduce vehicular rights to the countryside. I am part of the Trail Riders Fellowship (TRF) the national organisation that exists to conserve Green Roads and make sure that we can ride now and into the future. This year I was part of a campaign to raise funds to take a local council to court and force them to re-open a green lane that we believe was unfairly closed. We managed to raise over £13,000 in a month. As you might expect, I also made a little film to help convince people to donate – Green Running: https://vimeo.com/135569089
Land access is a complicated and emotional issue, and both sides of the argument have valid points. But at the end of the day the countryside is for everyone and if all users show respect for each other then there must be a way forwards. If you are interested take a look at the TRF website/online magazine – which incidentally I am editor of : ) 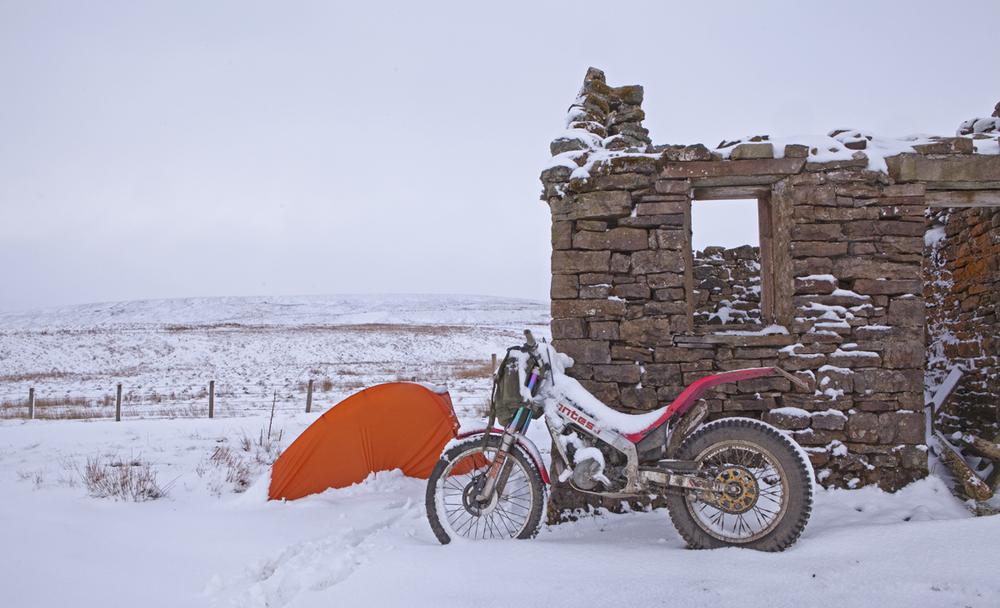 What have you been riding and where? What have you been up to in the interim year?
Well, not long after The Coast To Coast Trial I became a dad so my riding has been somewhat clipped short of late. I still get out on the KTM 450 once a month but I also bought a project bike to work on at home. Cover your ears, it’s a road bike! A Honda Bros 400 which I’m slowly chopping up and customising. I have no idea what I am doing but it’s fun.
I have also picked up a mountain bike so expect next years film to include some human powered propulsion.

A custom roadbike! That’s a shift from what we’ve seen from you. That’ll be exciting. What’s in the pipeline?
Raising a tiny human being is the big project at the moment. Juno is only 4 months old but I’m hoping that surrounding her with mud, oil, carburettors and knobbly tyres will give her the best start in life.
There’s a few of us who have become Dad’s recently so I’m thinking there’s ingredients for a motofilm adventure there somewhere. I guess you will have to wait till next years festival to find out.

Are you coming to NYC this year? If not, we’ll have to try to work something out for us to come to you!
As you may have guessed, the party will have to go on without me this time. I had a blast in 2014 so I’m sure that you guys will be bigger and better this year. Well done to all the film makers who made it, it’s great to be part of the MFF family with you all.

Thanks Greg and we certainly look forward to your submission next year. Until then congrats with fatherhood!