A Parley with Paolo Asuncion 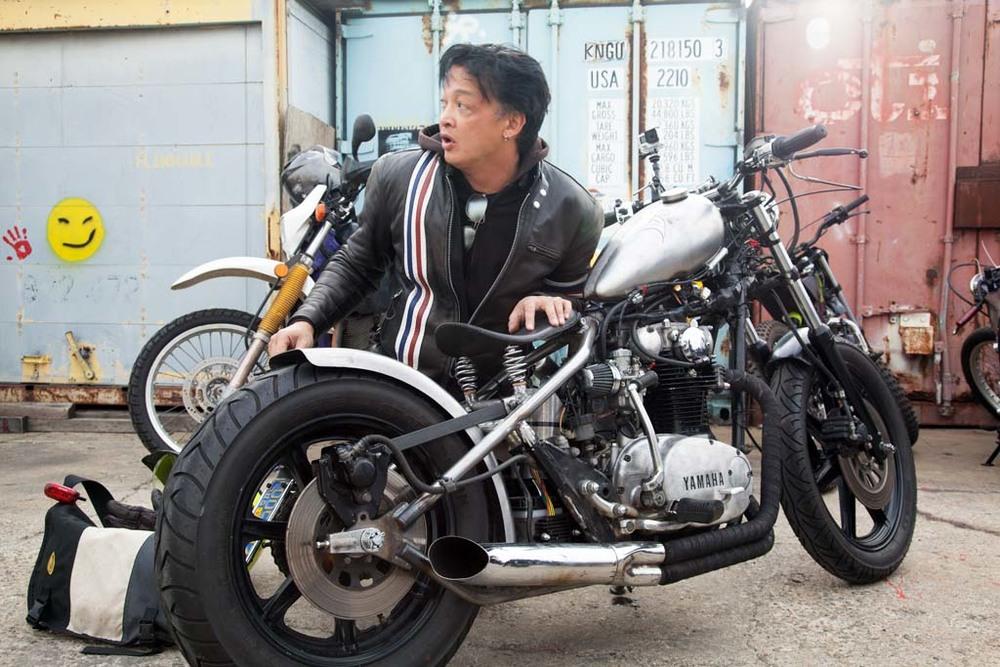 Paolo Asuncion at the Dirtbag Challenge

Last year “Dirtbag” screened in the MFF, and this year we have “Dirtbag 2: Return of the Rattler.” These films document builds for the Dirtbag Challenge, to build a bike in a month for under $1,000. After filming other teams, your sequel documents your own team’s build. What were some of the challenges you encountered both in the build and in filming yourself?
Because we decided to join the contest a week after the “go” date had already been announced, we got a late start. We only had three weeks to build a chopper, and since all of us had full time jobs and families, that meant three weekends and the odd weeknight here and there. All in all, we built a chopper in eight days. With no experience. As such, as we were building, it was a heads down type of thing, where we were completely focused on the build itself. In the beginning of the shoot, I was both building and directing my camera operator. On the nights that I was building alone, I took the time to set up the camera and shoot from different angles. That changed around day three as I realized how complicated the build process was and how unprepared we were. There was so much I did not consider when we decided to join the contest. Wiring. Gussets. Bungs. Where to mount the fender. Spacers. Every 10-minute task stretched out to an hour, and then we would discover something else we had not thought about after that. Camera direction and placement became secondary – you can see this in the movie: there are entire sequences where the camera doesn’t move. For the most part, I picked my battles, focused on the bike and hoped that Phil (my cameraman) gave me enough coverage.

Can you tell us about your filming technique? You’re right in middle of the build and filming, how do you manage to be on both sides of the lens?
I’m not. For most of the build, I was in front of the lens, checking in with my cameraman from time to time. When we were done with the build, I went and filmed the other builders and all the interviews of my own team, as well as the finale. That was when I could flex my muscles so to speak. At that point the contest was done and my only deadline was the MFF submission date. I mean the short answer is there is no technique. When it comes to shooting, I just try to gather as much footage as I can. It’s in editing that I feel most at home and have the most fun. 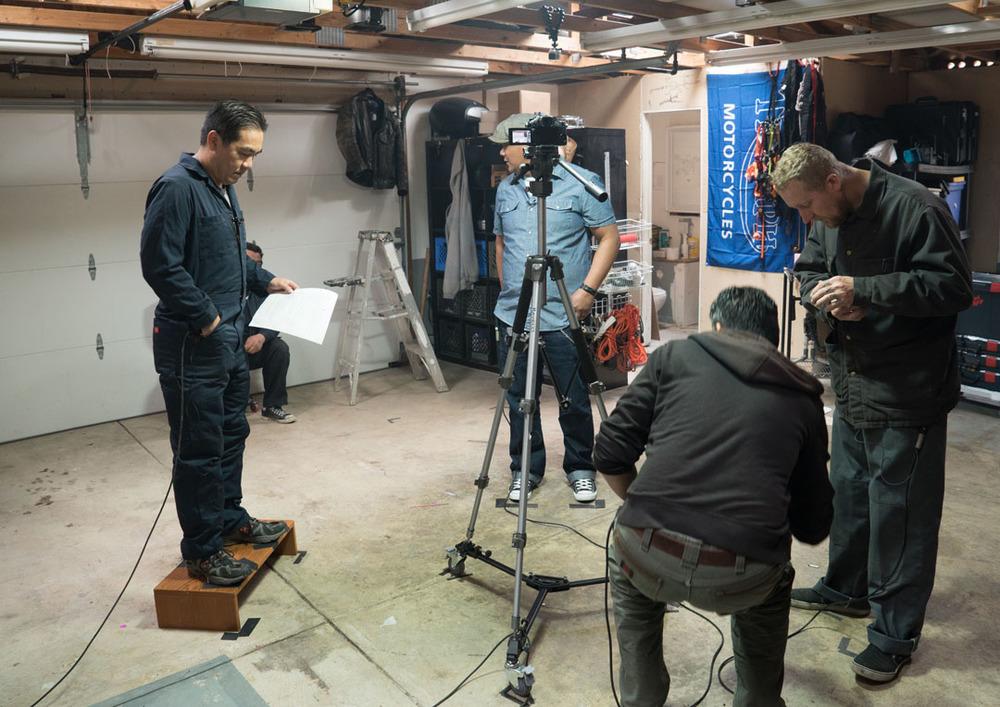 What do you find to be the more difficult aspects of filmmaking?
Knowing when you’re finished and keeping in mind who you are making this for. I ended up with over 90 hours of footage that had to be distilled and whittled down to an hour. That’s hard to do when you are in love with most of the images. Same goes for the music. I wrote the score, and while recording it I found myself adding more layers and rerecording drum parts or perfecting that one certain guitar riff. I had to keep reminding myself of the finished product. I usually start these projects with a clear vision of the final in mind and I plow ahead ’till I get there, adjusting along the way when there are elements I cannot control. But for the most part, it’s a complete movie in my head before I begin. If I start thinking about how to market it, or who the audience is, or what someone will think of the bass line…then it gets muddy. At the end, I make these movies for me and my friends. If it makes us laugh, it’s in. If I’m being honest with what I’m saying, it’s in.

Maybe I’m not doing it right because, apart from matching everyone’s schedules, I don’t find any of this difficult at all. This is fun! I mean in “Dirtbag 2,” I got to hang out with my best buds; I got to build and ride a bike; I got to edit and film; I got to write and play music; I got to USE music from my band and from my friend’s band (he’s in the movie also); my 4-year-old daughter even makes a cameo in it…basically everything I love in life is in that movie. It would be ungrateful of me to consider any of this ‘difficult’. 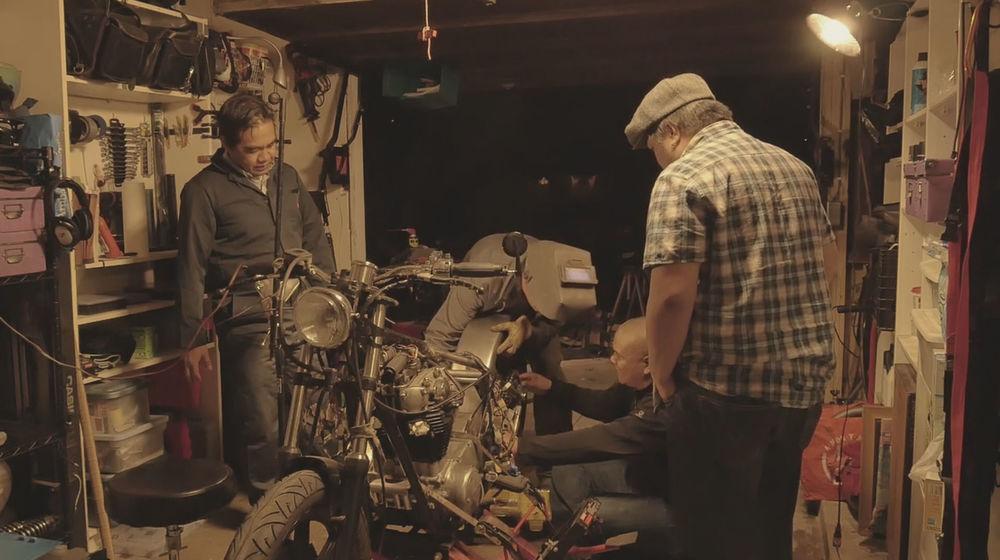 Meeting the Dirtbag Challenge with ‘The Rattler’ in “Dirtbag 2: Return of the Rattler”

One year you filmed, then you built and filmed. What’s next?!
There are a couple things in the works.

Filming “Dirtbag 2” and building a bike made my friends I want to get our own shared garage space. We did and every time we hang out it’s always a good time. So we’ve decided to just film what happens as it’s happening and make a web series out of it.

Another project that is the third installment in the “Dirtbag” trilogy – the founder and some of the builders have been wanting to take their home built choppers on a cross country trip via the Trans America Trail (maybe even down to South America) to prove that one does not need an expensive adventure bike to have an adventure. It’s an homage to “Cycles South” in a couple ways: this is how it used to be done as far as both riding and filming. The challenge is finding the time to do this.

I’ve also been wanting to get away from the documentary format and try a more narrative approach to the same subject matter, so I’m currently in the storyboard stages of developing a music video about what it is that connects us to these machines and how we give them their souls.

What have you been riding and where?
I’ve a couple bikes, but my favorite one is the DL1000. I use it to commute to work because after splitting lanes for 50 miles, you get to work wide fucking awake. The last long ride I took was a 900-mile weekend jaunt to Highway 36 in Northern California – THE best roads around here.

What have you been up to in the interim year?
Workin’ my 9 to 5 as a graphic designer for a video game company, wrenching when I can, and getting away with my family whenever I can. Speaking of family, there is one reason I like to present these films in public. At the beginning of our films, you see a quick montage of a certain person that fades and becomes a logo that says “Vargas Films.” My dad was an actor in the Philippines, and his screen name was “Vic Vargas.” I grew up on movie sets but I never really caught the film bug until after he passed away 10 years ago. Getting our films screened in theaters is my way of putting his image and his name up on a big screen again. It’s an homage and a thank you, and a way of making him live forever.

Last year you and a number of people in “Dirtbag,” including Turk and Poll Brown (who appears in “Dirtbag 2”), attended the screenings. Will we be seeing you this year?
Almost everyone you see in “Dirtbag 2” will be at the MFF – except Luis who has a 6-month-old baby boy. A few other people from all over are also coming out to support us and the MFF.