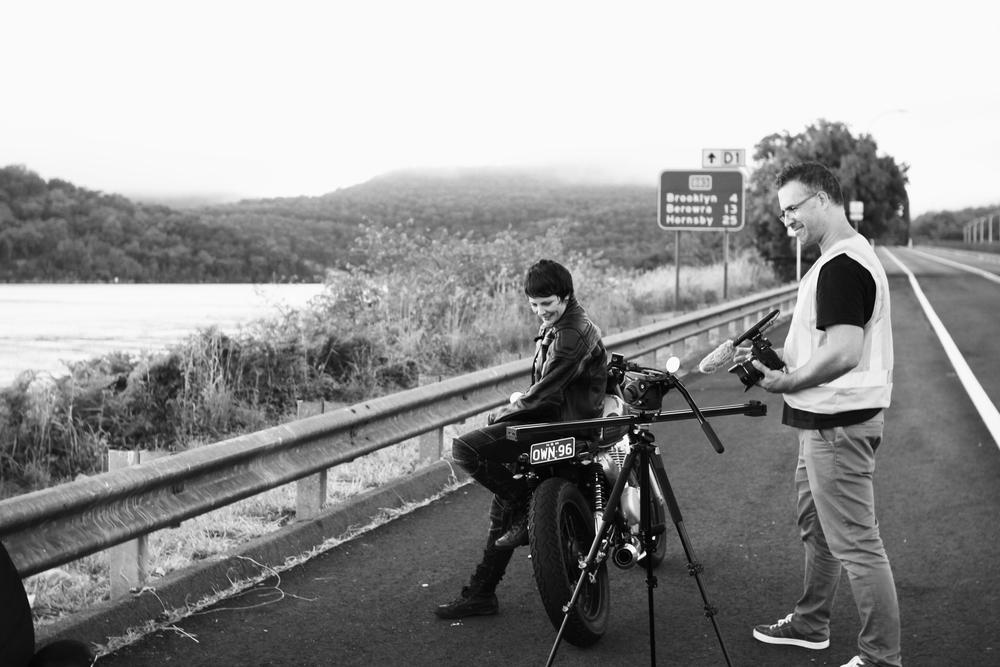 Last year you had two episodes of your series Stories of Bike in the MFF, and this year you have two more. Can you tell us a little bit about how you selected the titles that you submitted?
Both of these films are pretty special to me and are about self-discovery and how a motorcycle is the most amazing tool to have in the help of this process. However, both episodes are kind of on the extreme of the discovery spectrum. One is an exploration to the opposite side of the world, and the other is the re-discovery of a city and the new experiences within it that a motorcycle helped to uncover.

So for the festival this year I submitted two episodes from Season 2, which I was still in the process of making while I was in NYC for the MFF last year! The first episode is “Answers.” The second film, “Discovery,” only became possible because of the MFF itself, because of you wonderful people! So, I had two episodes last year.

Through the generosity of your community in Australia you were able to attend last year. While you were here you filmed “Discovery,” which is screening this year. Can you tell us about that experience because I understand that it was quite different than your normal process and it is the first outside of Australia?
The filming of the “Discovery” episode was, quite simply, magical. Already, I was on a high before arriving due to the spirit and generosity of the Sydney Café Racer community that raised the money to send me to the MFF, and I wanted to make the most of my time in NYC. I also reached out to Corinna to help me find a suitable subject for an episode, and we found Kristen and her story of rediscovering New York once she started riding again. Coincidentally, just before I left, a New York based cinematographer, Brian Stansfield, reached out to me saying he loved the Stories of Bike series and wanted to offer his services to shoot an episode somehow. I said I was actually going to be in New York for the MFF, so why don’t we shoot something together!

What about “Answers,” the second film in the MFF this year, how did you and Jonathan meet and are you working on a follow up now that he has completed his trip?
“Answers,” came about from Royal Enfield asking if I would be interested in submitting a film for an event they were organising. I said sure, so I went on the hunt for a local Royal Enfield rider and came across this guy, Jonathan, who I was going to be riding from Sydney to London on a ’69 Royal Enfield Bullet 350, the same year and model of bike his grandfather used to ride. When I finally met Jono and he told me about the reasons for his ride, personal loss and the meaning of modern manhood, I knew he had an amazing story to tell. “Answers” was planned to be a three-parter, with this first part covering his preparations and lead up to leaving.

It seems that the episodes have become a little bit longer in general, are there aspects of filmmaking – narrative, directing, editing – that you are experimenting with or trying to consciously develop?
The episodes are tending to get a little longer. I’m not exactly sure why this is. I probably ask too many questions during the interview. But each episode is just the length it needs to be to tell the story it wants to tell. And also, it’s always hard to trim a good story.

What do you find to be the more difficult aspects of filmmaking?
The hardest part is always getting into the edit, reviewing all the footage. It always feels like a slow start and that I’m never making any progress. But sure enough, the story and the tone of the video begin to reveal themselves and take shape. Then it becomes fun again.

What have you been up to in the interim year?
Since the last festival it’s just been about keeping the work coming in. In the last 12 months I’ve really focused on my video work full time to improve my skills. It was a slow start to the year, but now I’ve got some regular work happening that always seems to push my comfort zone.

What’s in the pipeline?
I’ve got a couple of cool moto related projects in the pipeline. The first one had me back in the States last April to shoot Shinya Kimura, which was really special. His first video was the one that definitely inspired me to do this whole thing and clinched my love of telling motorcycle stories. I can’t say too much about it, but hopefully you’ll get to meet some familiar and new moto scene faces from around the world in a really interesting way.

I also got to shoot the lovely MotoLady (aka Alicia Elfving) up in Ojai. This will be the premiere episode of Stories of Bike: Season 3, when I get around to editing it and finishing season 2!

What have you been riding and where?
Actually, I’ve been riding a lot of other people’s bikes. I got to ride an old ’48 of Shinya’s up in the San Gabriel Mountains and even took Alicia’s Ducati Monster for a little spin. Back in Sydney I had the pleasure of riding Mark Hawwa’s (founder of the Distinguished Gentlemen’s Ride) custom Triumph Scrambler for a couple of weeks while he was in Japan. So much fun.

Are you coming to NYC this year? If not, we’ll have to try to work something out for us to come to you!
Unfortunately no, but I’ll hopefully have Brian and Kristen representing for me. I’ll definitely be there in spirit!