You were featured in “The Museum,” which screened at the second annual MFF. What was the origin of that film and how did it come to be?
The National Motorcycle Museum in the UK asked me to take part in an exhibition of motorcycle based art to celebrate their 30th anniversary. I wanted to do something special for the museum as it does a huge amount of work keeping a lot of historical bikes running. I had produced a large studio piece for The Bike Shed Event 3 earlier in the year and wanted to produce a large piece for the museum. However, I also wanted to sketch at the museum, as I do when travelling to various motoring events. In order to do this I made a scrolling sketchbook that enables me to sketch on long rolls of paper. “The Museum” piece ended up about 3.5m long. I thought it would be great to document this approach to show people how I work and help explain what I do as an automotive artist; a lot of automotive work is studio based, working exclusively from photos.

How did you or Tom Rochester, the film’s director, hear about the MFF?
I heard about the film festival in 2013, and when I knew the film was going to happen the MFF sprung to mind. Luckily we had finished it just in time to get it submitted.

You and your family have a history, shall we say obsession, with motor vehicles. However, you worked in video games for a while. Can you tell us how you got into that and how you made your way to automotive illustration?
I’ve always like cars and bikes since childhood, especially custom cars and VW Beetles. When I met my wife Rowena I would go to her father’s house on the weekend, which was a real eye opener. Nick is fanatical about Morgan 3 Wheelers and British bikes among other machines, and it wasn’t uncommon to have engines on the kitchen table or even in the fireplace! I used to paw through his magazines and books, and my love for old machinery was revived. We went to events and race meetings, but my artwork at that time was not automotive at all.

I gained a degree in Fine Art specializing in painting, and my work was totally abstract based on satellite photography, but illustration, comics and graffiti have been constant influences. Upon graduation I wasn’t taken with the idea of a fine artist career, so I looked for other ways to make a living. A friend gave me a 3D program, and I soon worked out that if I could use it I could possibly work in the computer games industry. I locked myself away for six months, taught myself the program, and created a portfolio of 2D and 3D work. I got a job as an artist for about nine years, but towards the end I had become a lead artist and wasn’t really doing artwork any more.

This is where the automotive work started. I loved old black and white photos of racing scenes and started recreating them using India ink. Nick encouraged me to show them at a Morgan 3 Wheeler meet. After a really positive response I started showing at vintage motor shows where I would paint in oil or acrylic recreating a period photograph. This was fun, but at an event in France I saw Jean-Marie Guivarc’h, now good friend, sit in front of a Nick Morgan Aero and sketch it there and then. That’s when I had a rethink, “I could be sketching the real thing!” At the shows there are so many machines; now I mostly go around sketching with a portfolio of my work.

Your mobile studio, if we can call it that, is quite ingenious for your format. Can you tell us a little about your process?
Yeah, this is a work in progress. I have a fishing stool that doubles as a backpack that fits an A4 sketchbook and materials—it’s perfect. At shows I go round the whole event and pick one machine that interests me to sketch. Sometimes people ask me to sketch their machines, and this is a great way to deepen my knowledge as I have direct contact with the owner who can tell me more about their machine. Sometimes people will stop and talk to me about the machine I’m sketching too. I love the whole social aspect of the motoring scene and I see the way that I work as an extension of that.

Much of your work is pencil, ink and watercolors. What about these media do you like?
My roots are in painting, but the ink came out of the necessity to do something quickly. At events it takes me 1 to 2 hours to sketch a machine. I used to do just ink sketches using technical pens, but I wasn’t getting the marks that I wanted. I found flex nib fountain pens that give a wide range of line widths based on varying the pressure; it’s like a small brush. I also use a brush pen for larger black areas. After the show, in the studio I put washes of watercolour or ink on the sketches. This is all I can put over the ink sketch without destroying the work. I used to be scared of watercolour as you have to think about the white of the paper as your light, and layer up the paint to achieve shadows. But having used them for a while I’m getting fairly comfortable with them. 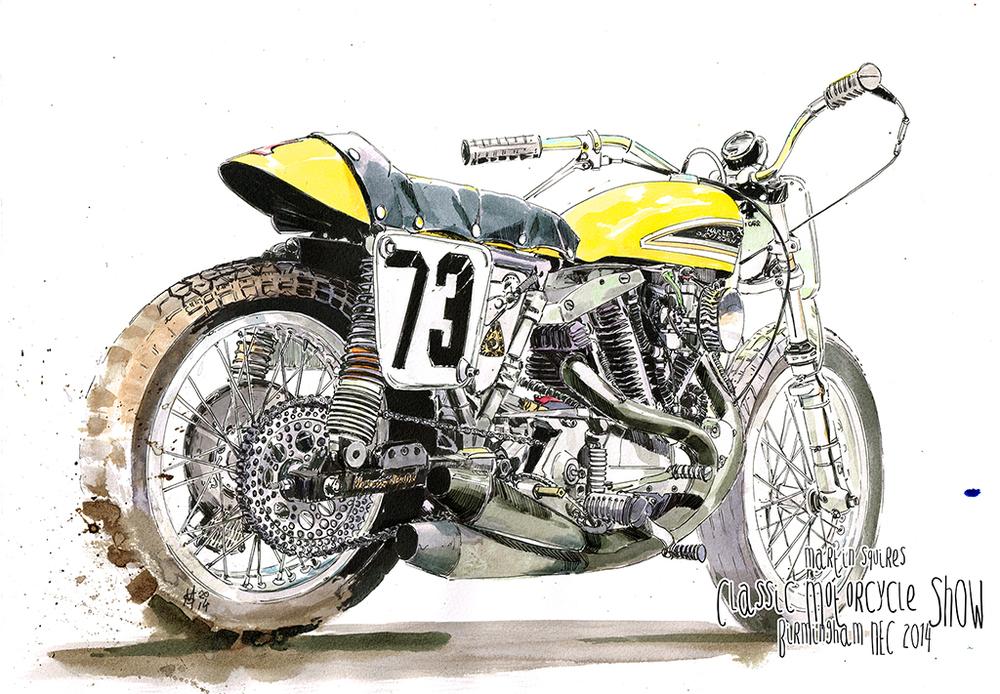 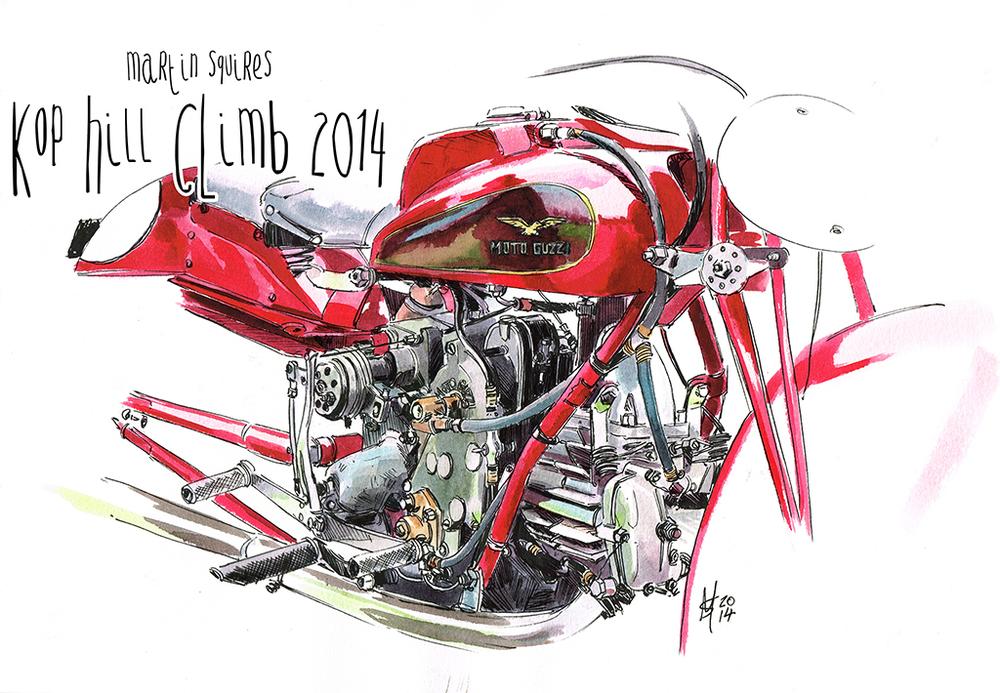 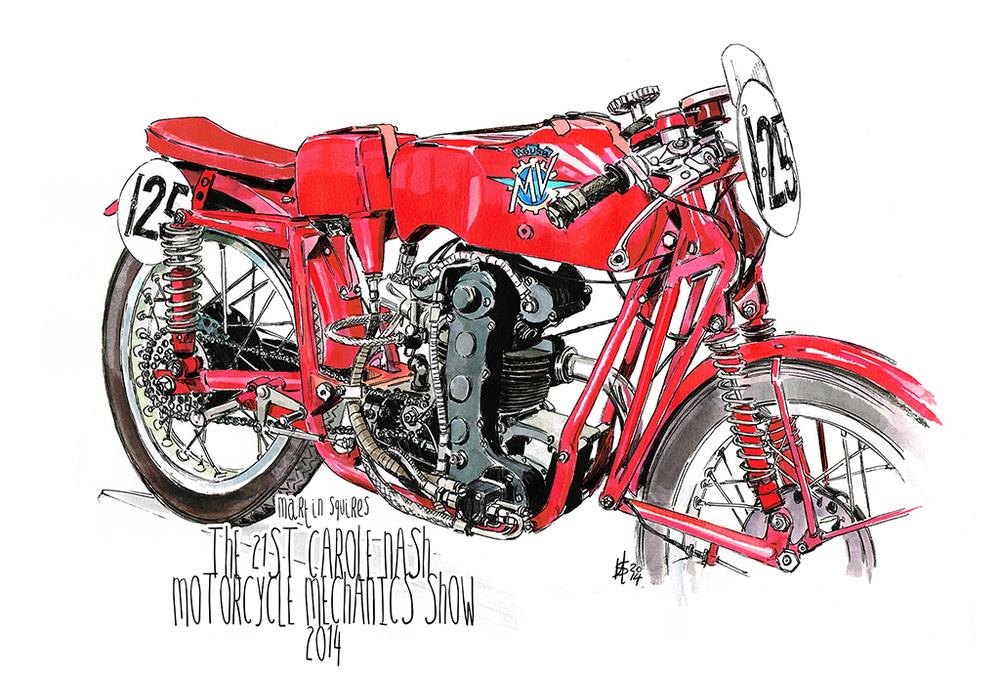 Much of the automotive world tends toward photography and industrial design illustrations, but much of the classic scene is about hand built works. Your drawings, which appear in the British monthly Classic Bike Guide, definitely show your hand and a process. Do you find a split in automotive illustration, and where else do your works appear or do you show them?
I never thought of my work tending towards photography, I guess in a way I’m a cheap and slow camera. I can see the relation to industrial design illustrations, as I try to capture as much of the technical detail as possible. However, I try to keep a fine balance between being technically correct and the work existing as fine art. Jean-Marie Guivarc’h, Stefan Majoram and Jeremy Lacy are the only people I know who sketch in the same way, live on sight. I think sketching out and about is really a fine art practice, and the work tends toward that style because of the process. The artist has to be fairly fast and thoughtful about the marks; in a studio environment the work is even more considered and the work reflects that. Automotive illustration is in a strange place as it hasn’t been used extensively in publishing since the ’80s, although some magazines now use illustrations more as something to punctuate the photography. Automotive work has a select audience as it really appeals only to the motoring community, and that’s where it’s relevant. With my larger work I’m trying to push the automotive subject in more of a fine art direction; whether this will reach a wider audience, we will have to see.

You came to New York for the Film Festival, but you also did a bit of work by going to Sixth Street Specials and Paul Cox Industries to do some drawings. Tell us about your expectations before you went to their shops and what you came to find and to do.
My main aim was to use the scrolling sketchbook to produce 360-degree sketches of the workshops, but I was open to change if the workshop needed to be portrayed differently. I looked up both shops so I had an idea of what to expect, but I knew that it would all change as soon as I got there. At Sixth Street the main workshop was perfect for the 360-degree sketch as it was just one room. I sat in the middle of the workshop and sketched away as the guys carried on with their work. I really enjoyed experiencing the comings and goings of the workshop. Paul’s place was different than Hugh’s as it’s a large space with lots of different areas. I worked around the space producing a 360-degree sketch made up of the different sections. I spent 2 days at each workshop and within those 2 days I had roughed out the entire workshop and inked as much as I could. I took photos as reference so I could finish the pieces in the studio. I would have loved to do the whole thing on location but time did not allow. One thing that I didn’t know before I went to the workshops was that Paul used to work out of Hugh’s place when he started with his leather work. I was really happy that the two shops were associated it was a perfect connection.

What are you working on now and what do you have in your sites next?
I’m considering a series of portraits based on world firsts, such as one I did of Yuri Gagarin, but I will see where that goes. I’m currently finishing off the Sixth Street scroll and working out how that will be displayed. Then I’ll finish the Paul Cox scroll. I’m producing these larger pieces for a solo show in the near future. I’m looking for a relevant place to do this so if anyone is interested please get in touch. I’m continuing with commission work and sketching at the last few events of the year. Over the winter I hope to get a chance to do more studio work combining my sketching with painting—a new direction again. Also Tom and I are planning on doing some more filming, so hopefully we have something to submit for next year’s festival.

For more information and more of Martin’s work check out:
His Blog: martinsquiresautomotiveillustration.blogspot.co.uk
His illustrations and coverage of the 2nd annual MFF in NY: HERE