Chief Judge and Festival Co-Host, Author of The Chopper: The Real Story 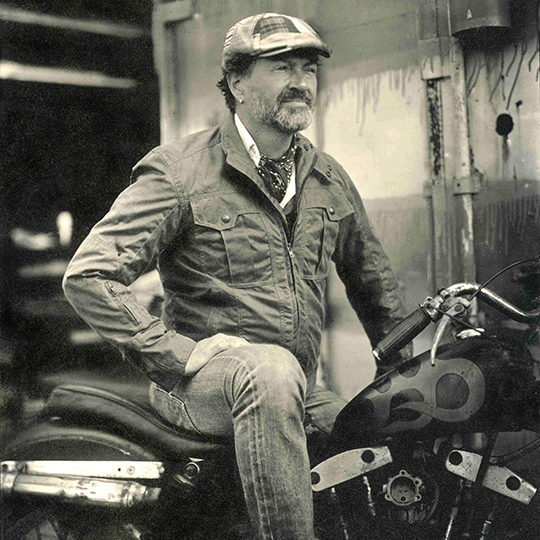 The film virus infected me 3 years before I was similarly exposed to motorcycles. At 12, my parents dragged me from Stockton (still the USAs murder capitol) to San Francisco to see Andrei Tarkovsky’s poetic sci-fi masterpiece Solaris; neither the sea, nor movies, ever looked the same. At 15, my little Honda Express was no cliché of freedom, it was my escape pod, ferrying me to night classes, early graduation, and adulthood. Ive been repaying the debt for 37 years, filling shelves with motorcycle books, traveling the world to see or buy or ride interesting machines, presidenting clubs and judging shows, organizing rallies and pioneering the moto-blog form with TheVintagent.com.

Its culture what interests me, and dusting away the sociological clutter, that means stories. As a writer I tell them, as a reader I collect them, and as a blogger Ive dissected the crazily different tales in Scorpio Rising, Orpheus, The Leather Boys, etc. Because these films, these stories about motorcyclists, are our culture, whether told by or about us. The world sees us in The Wild One or Easy Rider, and weve made ourselves in their image too, because film has power. I can still quote every line from Kathryn Bigelows first feature, The Loveless, a talismanic film for my gang in the 80s.We are currently in the thick of a motorcycling Renaissance, a two-wheeled creative explosion not seen since the 1960s. Artists, bike builders, writers, photographers, and filmmakers are exploring that crazily magnetic thing about two-wheels-and-a-motor. Its a simple formula for magic, and were all dancing around the fire when we not only ride, but make art to do with the riding. I believe in the Motorcycle Film Festival, because motorcycling deserves it.

In addition to his regular musings on everything motorcycle related on TheVintagent.com, Paul is the Custom&Style editor for Cycle World, an editor for At Large, and columnist for Classic Bike Guide and Mens File. He is the author of the first comprehensive history of custom motorcycles, The Chopper; the Real Story(Gestalten), wrote the best-selling Café Racers (MBI), and co-authored The Ride(Gestalten). He is currently working on The Ride II. Paul consults for motorcycle auction houses, is the host of the Quail Motorcycle Gathering, and a judge at the Concorso di Villa dEste. He also exhibits the MotoTintype wet plate at shows from Austin to Biarritz.