We’re pleased as a podium finish with the artwork for this year’s MFF. For our third annual, artist Rich Lee brings us something completely different. We caught up with Rich to learn more about his art, influences, interest in motorcycles, and children’s books. 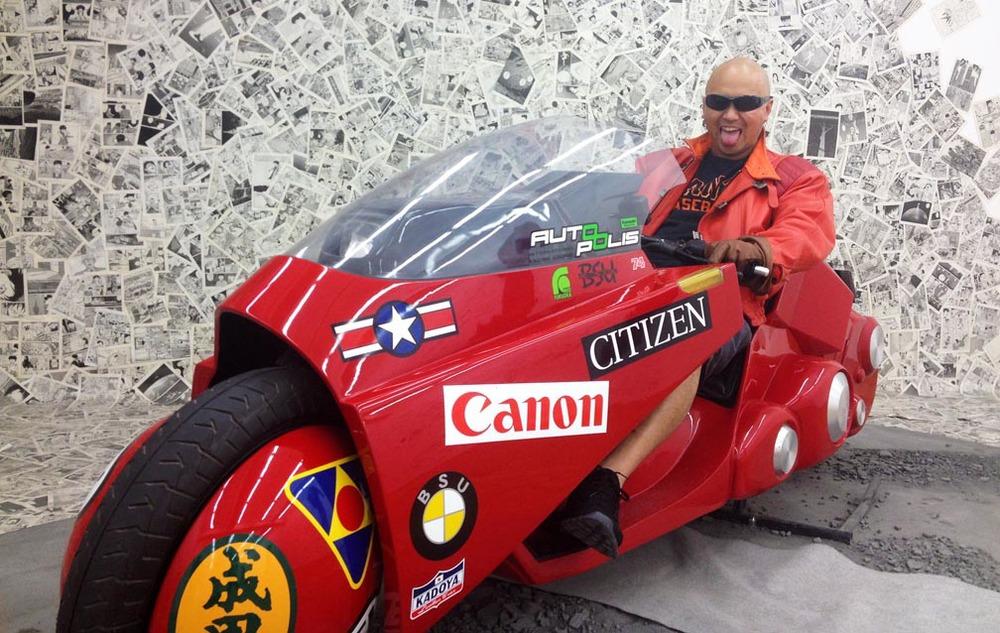 Hi Rich. What inspired the artwork?
I spoke with Corinna (MFF co-founder) and asked what she wanted to see. She stated that her dad had worked in comics for some time, so she was partial to something with a comic feel to it. I thought it was a great idea since I love working in a comic book style!

I looked up some videos posted by MFF on YouTube to get an idea for what the event and organization are like. From the videos, I imagined what it’d be like to ride to the screenings – bombing through the evening streets of Brooklyn with all the brick buildings in the area. I also looked up what vintage street signs used to look like to give it a sense of place. 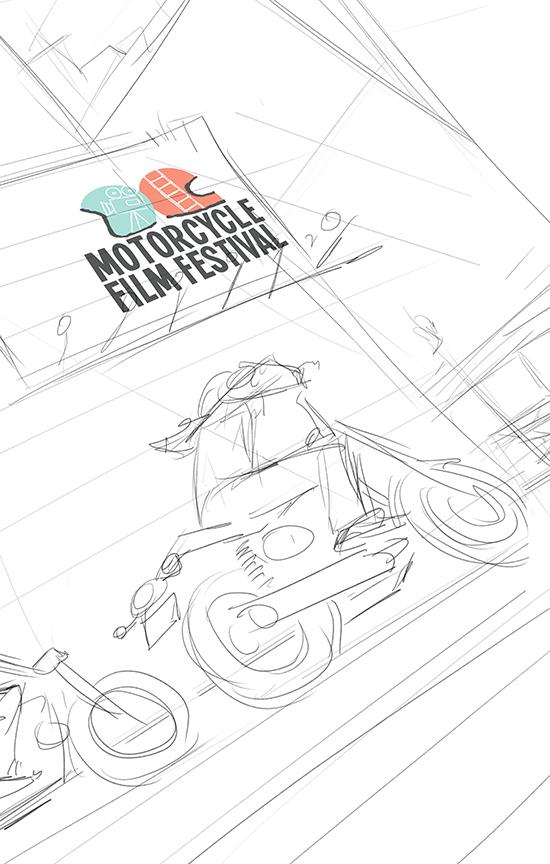 How did you learn about the MFF?
A couple of friends had their film shown at the Film Festival in 2014: Dirtbag Challenge.

You’ve done work for a long list of motorcycle publications. What is your attraction to motorcycles and how did you get involved with them?
Yeah the moto publication stuff is pretty cool – I feel very fortunate that I’m able to contribute!

I got into motorcycles when I was in high school. I couldn’t afford a car so I looked at other forms of transportation. I remember going down to the bookstore and flipping through moto mags and just oohing and ahhing over bikes like ZX-7RRs and 600F3s (I thought the Joe Camel edition was the coolest thing). A year or two after high school I ended up getting a used, ratted out 600F2 and that was that. I eventually retired the F2 at about 110,000 miles and now I’m riding a CBR600RR and DL1000. Been riding since 1998/1999.

I like the efficiency of the motorcycle. I like not having those creature comforts a car can provide, and I like not having four wheels of wasted space. I know cars are useful for certain things but when I commute or just need to haul my own ass around, I’d rather twist my wrist and go.

How did you get started in illustration and how did you get to where you are today?
I grew up loving comic books and all the different styles and storytelling tools used in them. I’d spend hours just looking at each panel and studying the line work over and over. I thought I’d be a professional comic artist one day!

I earned a Master in Illustration from the Academy of Art here in San Francisco, and a Bachelor in Graphic Design from Sacramento State University. While working on my master’s, I was freelancing full-time and it was kinda fun working on different projects all the time. Between jobs I would draw things that interested and inspired me like motorcycles and whatever else struck a chord with me at the moment. The motorcycle drawings seemed to be a favorite of some folks on the internet, so I kept at it and eventually got the attention of some people in the publishing and advertising world.

Currently, I’m a graphic illustrator for a marketing agency in San Francisco and freelance illustrator for a motorcycle publication. I really have no complaints – the diversity of work I’m engaging is challenging and a lot of fun.

Your work touches on many different styles and influences – noir, woodblock, cartoon. Who and what are your influences, and do you have an underlying theme that guides your work?
I love good art; stuff that when you see it, you know they spent time honing their craft. In general, the artists I really enjoy are Moebius, Will Eisner, Bernie Wrightson, Adam Hughes, Sergio Toppi, Franklin Booth, Katsuhiro Otomo, Yoji Shinkawa, Frank Frazetta, JC Leyendecker, and John Singer Sargent. In terms of motorcycle art, my biggest influence would be the guys who did Joe Bar Team – Christian Debarre and Stéphane Deteindre.

I think the underlying theme to my moto drawings is that I want someone who rides to look at the drawing and say, “Yeah, that artist knows what he’s drawing.” I also want to convey that sense of action and excitement that one may feel when they grip and rip a throttle.

What is your typical working method? Do you usually have an idea that you put down or do you sketch to arrive at an idea?
There isn’t really a typical method for me. Sometimes I’ll watch a GP race and get inspired to draw one of the racers and other times I’ll be jogging when an idea pops in there and I’ll try to remember it by the time my run is over.  I use my runs as a way to work out a picture. I’ll sketch it out mentally before putting it on paper/screen. Sometimes I’ll sketch in a sketchbook and other times I’ll just sketch directly in Photoshop. I think whatever tool helps get the idea across most efficiently is what I’ll use. 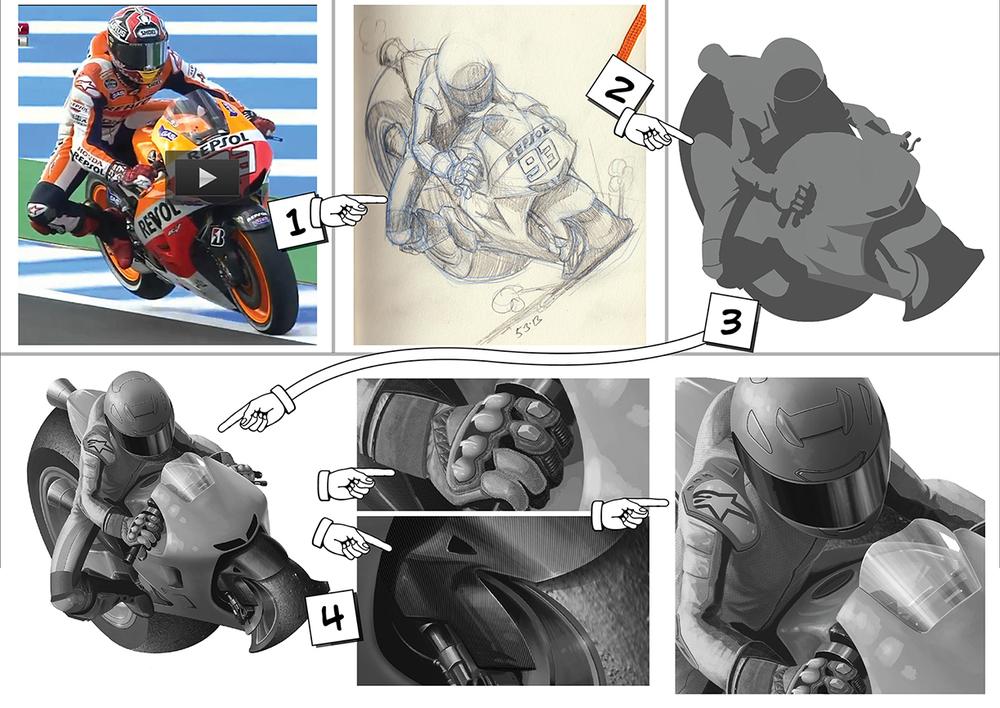 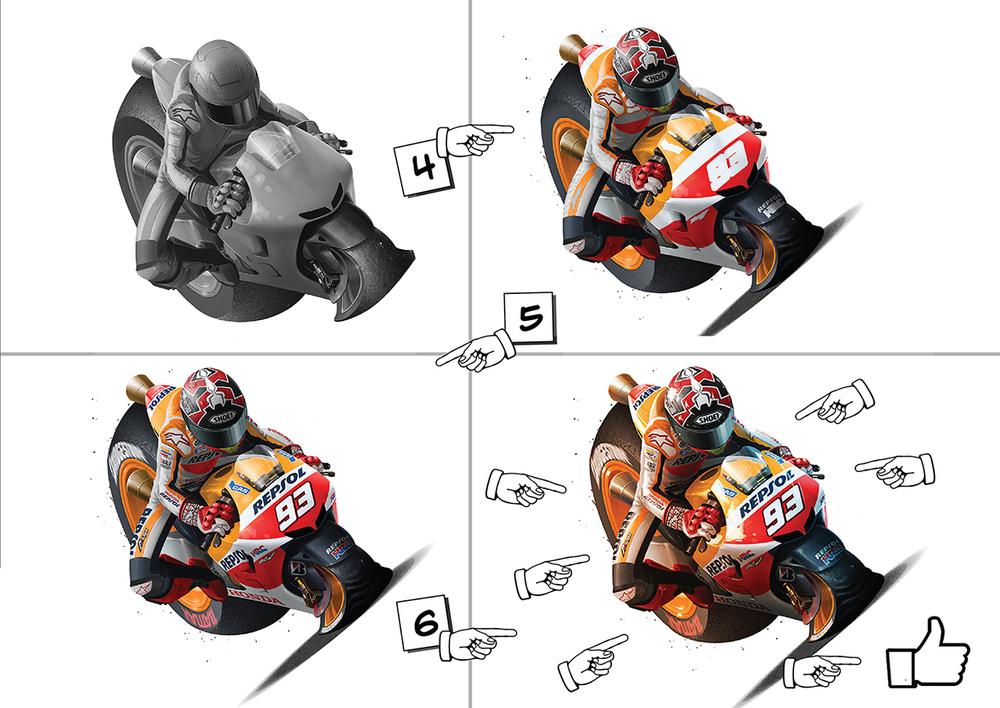 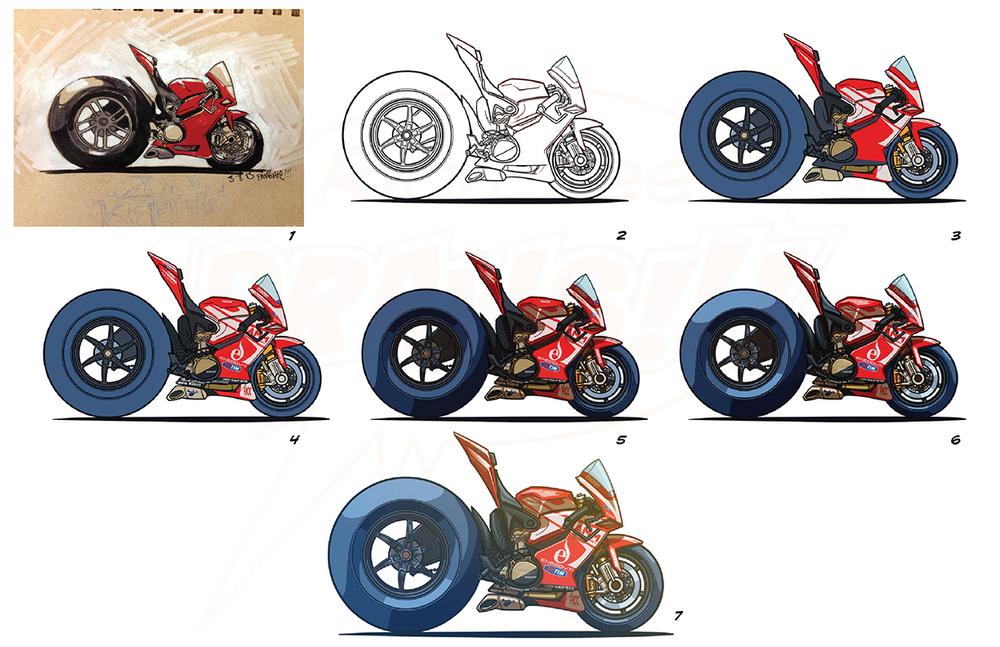 What are some projects that you’re working on now?
One of the long-term projects I’m pretty excited about is actually a children’s book – I didn’t write it, but I’m doing the illustration work for it. It’s really new territory for me and it’s fun to research all the children’s books out there especially since I have a 14-month old. I just finished a bunch of spot drawings for Motorcyclist magazine, which was pretty fun, and I’m about to start on some skateboard deck design and illustration.